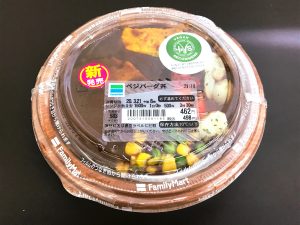 Family Mart, which is one of the major convenience stores in Japan, started selling special bowls for vegan and vegetarian on 17th March.

I was so curious that went to Family Mart! 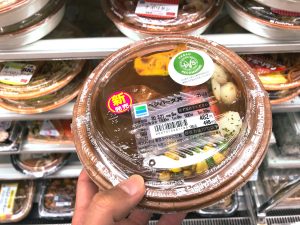 Went to Family Mart soon after checking the information!

Actually, I rarely buy lunchbox at a convenience store (although I buy onigiri sometimes) but vegan dish is exception!

When I checked inside the store, found Vegan Hamburg Steak Bowl!

Whatever angle I look at it from, it is an ordinary hamburg steak with demi-glace sauce.
Hard to imagine it is made all of vegetables.

I decided to have it at a eating space inside. 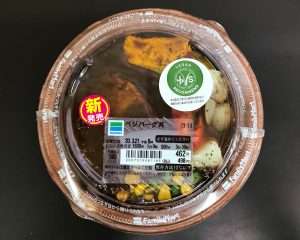 After warming up the Vegan Hamburg Steak Bowl, I have it at the eating space!

Every aspect, it looks like hamburg steak with demi-glace sauce but there is a vegan mark attached.

This is Japan Vegetarian Society Recommendation Mark.
It is the proof of the dish made of only vegetables and passed the standard properly. 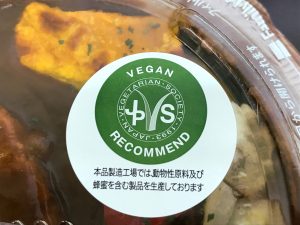 I also checked the ingredients and could see there was no ingredients from animal products including honey.

Only for the manufacturing place, it says (Japanese below Vegan Mark) “At the factory of this product, we make animal ingredients including honey” 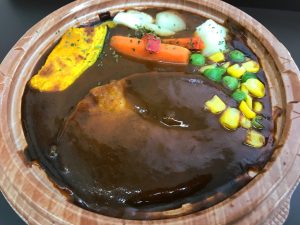 I cut the hamburg steak and it was tougher than expected.
Rather, I feel elastic.

On second thought, the name is bowl but isn’t there rice?
Finally, I noticed there was a container contains rice under it.

I see, recent bowls are properly prepared by separating the rice and sauce.

When I was a student, this kind of bowls were sold without separating the ingredients.
Now is the era companies pay much more attention to the details, isn’t it.

This is the rice and the Vegan Hamburg with demi-glace sauce. 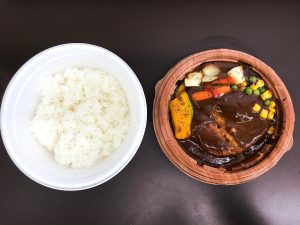 Combining them and finish! 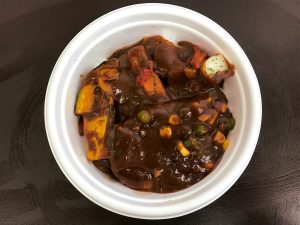 I’m gonna have it now.

This is certainly a bit different taste than the one used real meat.

As for me, I feel elastic and taste good!

By the way hamburg steak is made of soybeans.

I think most people don’t realize that this is made of soybeans if they are not informed in advance.

The elastic texture is made by mixing different size and shape of soy meat, they say.

Other than hamburg, it includes various vegetables such as carrot, potato, pumpkin, paprika, etc.

Carrot is boiled with sugar and tasty!
Pumpkin is also roasted.

The sauce is thick and strong.
But sweet.

Personally, as the carrot and the pumpkin are sweet from the first, the less sugar in the sauce is better, I feel.

The rice was Japanese rice.
Cooked fluffy and matches well with the demi-glace sauce.

My final judgement is taste good!

Just one coin with this quality is great! 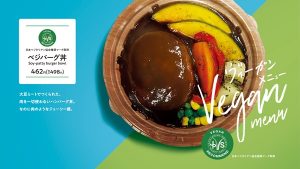 Following is the words written on the official website of Family Mart.

They also refers to the part of vegetable protein is getting attention as it does not affect the environment.

I think when we talk about vegan or vegetarian, most people focus on the lives of animals but there are many vegan and vegetarian people who care about global environment at the same time.

Far more water and energy are consumed when raising animals compared to those of vegetables.
Methane gas caused by animals also promote global warming and becoming a issue.

Now vegan and vegetarian foods are increasing at a fast speed in the world.

The reason big chain stores such as KFC or Burger King, etc. sell vegan and vegetarian food menu now is it has a great demand from ordinary consumers.

As for Japan, vegan or vegetarian foods are still not popular.

But Family Mart started selling this time before the rest of the convenience stores in Japan.

Vegan Burg Bowl is limited Only in Tokyo 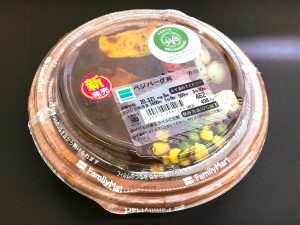 I was going to buy this Vegan Burg Bowl on the day or the next day it was sold but could not find at Family Mart in Saitama.

Still I could find one dish which is used soy meat, so I thought maybe this one is the one, but was not after all.

Although it used soy meat instead of real meat, it also included some ingredients from selfish and animal.

A few days after the day, when I went to Family Mart in Tokyo and checked, I could find Vegan Burg Bowl.

When I checked the official website of Family Mart after that, I could find a note of “Vegan Burg Bowl sold in Tokyo”.

Now it is sold only in Tokyo but might be sold nationwide if it get popular.

The sale area all depends on how the sales go.

Personally, I want the area to spread all over Japan.

Not only Family Mart but the number of other convenience stores and restaurants which offer vegan & vegetarian menu will increase from now on in Japan, I think.

Recent vegan and vegetarian foods are tasty.
Many of them are just like an ordinary foods and people can not know that without being told they are actually all made of vegetables.

That’s because the quality of vegan and vegetarian foods got far better over the decades in Japan, I think.

Now I can see restaurants which offer halal dishes, too.

It would be nice if a wide variety of people could get together and have more places with more choices to enjoy meals!