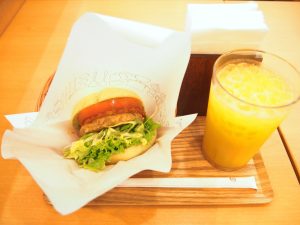 From Mcdonald to KFC, many fast shops now sell vegetarian or vegan menu in overseas.

But not in Japan, so I was waiting for the time they sell vegetarian and vegan foods.
And finally, MOS Burger, which is one of the big burger chain shops in Japan, started selling Green Burger.

The burger is made from all plants, not using any animal products.
I’ll introduce you here what it was like.

What is Green Burger of MOS Burger? What is the ingredients?

The vegetables they use such as tomato, lettuce, onion, etc. are produced in Japan.

Soy patty is literally made of soybeans.
And the tomato sauce doesn’t include any animal products, too.

Spinach puree is kneaded into its buns.

This is “an oriental vegetarian hamburger which is made all from vegetables”.

Where can you eat?

You can enjoy this Green Burger at MOS Burger nathiowide.

As there is a case of only in Tokyo like the case of Vegan Curry of CoCo Ichibanya and Vegan Bowl of Family Mart.

I first thought it might be only in Tokyo but was not.
You can enjoy Green Burger at MOS Burger all over Japan.
(Looks like there was a trial period sold only in Tokyo only for a short time first)

What I wonder now is if it is just for a limited time offer or not.

It all depends on the demand, I think.
If it sells well, they keep selling.

I’d like to contribute to the sales by visiting the shop sometimes from now on. 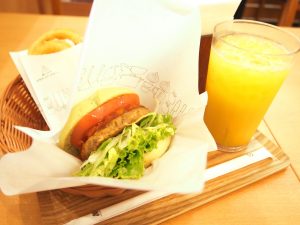 I was wondering when was the last time I came and enjoyed hamburger at this kind of hamburger chain shop.
I used to enjoy hamburger of Macdonald when I was little and a student.

Found menu in front of the shop. Soy Patty Burgers, it says.
I did not know that they also sell burgers with soy patty other than Green Burger.

The menu of MOS PLANT-BASED GREEN BURGER stood out on the counter of the cashier. 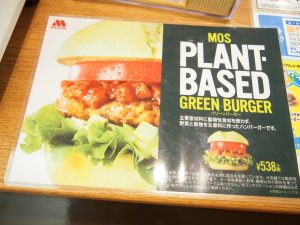 Green Burger, as I came here to eat this, I ordered it.
I was also curious about the other soy patty burger, so I ordered it as well for to go.

It’s been a while to come and sit at a table inside of MOS Burger but I feel comfortable here.
It is already past 2 pm and it is raining outside, so not crowdy at all. There is also a poster of Green Burger at a counter table, I’m looking forward to having it! It looks substantial, isn’t it.
Well, compared to hamburgers in US, it might look like just an ordinary size but for me, Japanese, it looks big. The bun have light green color.
They say it includes puree of spinach. From a conclusion, it’s very tasty!!

Rather, it was a hamburger which had a strong taste and made us wonder like was this really made of only vegetables?
Regardless of vegetarian or vegan, anyone can feel that it is tasty, I think.

The soy patty which is made from soybeans also has a texture close to real meat and it matches well with its tomato sauce.

Lettuce and green leaf were fresh, too.

This lettuce and tomato are produced in Japan.
The reason MOS Burger is a bit expensive compare to other big chain shops of hamburger is they focus on quality of ingredients like this.

The buns have a bit sweet taste.
It is the taste of spinach, isn’t it.

By the way, this hamburger doesn’t include 5 pungent vegetables.

I was very satisfied with this Green Burger.

Oh, and fried onion and potato were also tasty. I sometimes ordered this set of fried onion and potato when I was in university.
If you are a vegetarian or vegan OK with 5 pungent vegetables, I recommend it! The next day, I had Soy Patty MOS Yasai (Vegetable) Burger at home.

Although I put it in the refrigerator, already one day passed, so I thought it wouldn’t be fresh anymore but it had been holding its shape. If this was an ordinary hamburger with real meat, it would have been mushy one with its flavor, I think.

Its patty is also made from soybeans literally.
They say the patty also includes vegetables such as onion, celery, mushroom, lentil, chickpea.

Looked carefully to notice that the order of the ingredients is opposite to Green Burger’s.

Maybe it’s because the texture makes a difference depends on the order.
They pay attention to the details!

There are 2 types of sauce, aurora sauce and avocado sauce, for the burger and you can choose.
The staff did not ask me anything and I had a burger with aurora sauce automatically.
It depends on the shop if they have an option of sauce, maybe.

Buns were not like the light-green color of Green Burger.
They were ordinary buns used for ordinary burgers. It had lots of flavor and the taste was very good!
The aurora sauce’s light sourness and saltiness match well with the soy patty.

It was a substantial burger for me.

I was also curious about other soy patty burgers such as Soy Teriyaki Burger and Soy Cheese Burger, etc.

Both burgers which used soy patty tasted very good and I was very satisfied! 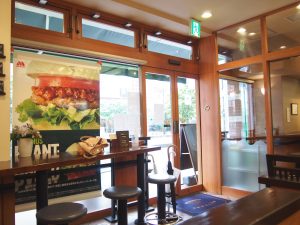 It made me pleased that this MOS Burger is Japanese hamburger shop.

Since I became semi-vegan, I have rarely visited hamburger shops which I used to enjoy meals.
But I can visit again from now on although it is limited at MOS Burger for now.

For convenience stores, Family Mart and Natural Lawson, for fast-food chain shops, MOS Burger and CoCo Ichibanya are the pioneering companies for vegan and vegetarian foods in Japan.

As animal industry also closely connected to the global environment, I hope alternative foods spread more here in Japan like other countries.